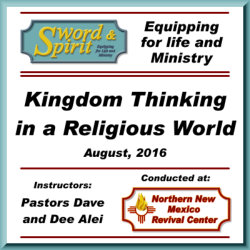 Kingdom Thinking in a Religious World

The Apostle Paul teaches us in Romans 12:2 that we are transformed by the renewing of our minds.  Most of us are unaware that much of our world view and life perspective has been influenced by cultural or religious norms that, upon further reflection, do not have a solid Biblical foundation.  Our educational system, the media, and our cultural standards, while often built on good intentions, have led many believers to accept as true those ideas that conflict with the character and nature of God.

Anyone familiar with the New Testament knows that Jesus faced a great deal of persecution from the religious establishment of His day.  Many understand that it was, in fact, the established religious "authorities" who crucified Him.  This was, in part, because He claimed to be God in the flesh, but it was also because He challenged their religious ideology.  Jesus told the scribes and Pharisees that they were rejecting the commandments of God in order to keep their traditions, in essence, making the word of God of none effect (see Mark 7:6-13).  He also chastised them for searching the Scriptures because they thought it was they that contained eternal life, but that it was He, Himself, that is the life.  And they refused to come to Him (John 5:39-40).

This seminar challenges some of our traditionally held beliefs and asks the question, "Could we be making the same mistake?"  This is not a seminar for the weak of heart, or for those who are certain that they are experts in sound doctrine.  It provides an opportunity for us to allow the Lord to address some of the things that we have taken for granted over the years which may be a "way that seems right to a man, but its end is the way of death" (see Proverbs 14:12 and 16:25).

Back to All Seminars